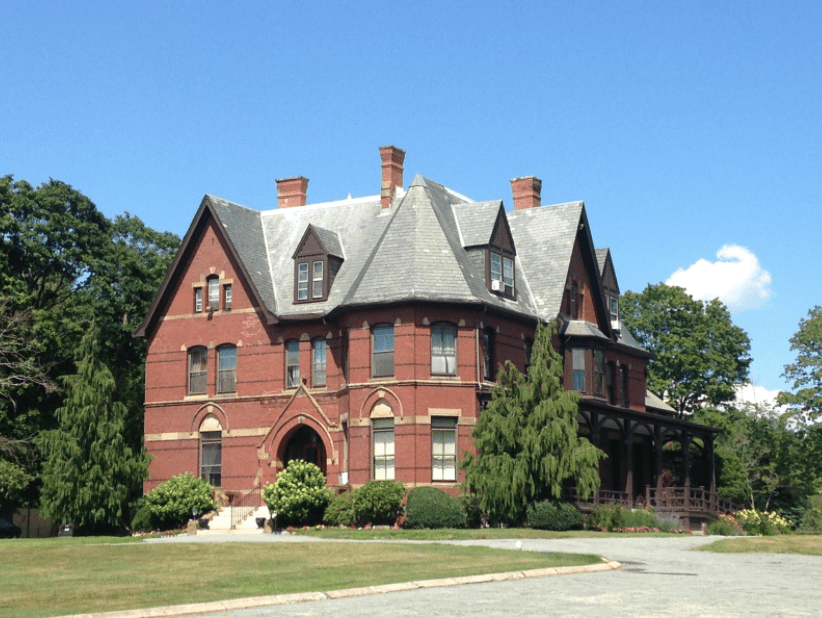 Built in 1876 by Peabody & Stearns for William Cabell Rives Jr. of Virginia and Grace Winthrop Sears of Boston, Rosevale is one of the few residential examples of Victorian Gothic architecture in the United States. The house is built of red brick and olive-colored granite with steep dormers, gables, an octagonal turret next to the main entrance, as well as a bell tower on the north side of the house. The house has high ceilings on all three floors. The 10,578 square foot home features 9 bedrooms and 7.5 bathrooms on 2.09 acres with entrances on Red Cross and Rhode Island avenues. There are 6 units in the main house, which do not include any of the bedrooms on the first floor.

A 2 bedroom, 1.5 bath carriage house is located at the northeast corner of the property on Rhode Island Avenue. The master bedroom has a large semi-circular window which sits atop the stable doors.

It is a short walk from Easton Beach, Cliff Walk and Bellevue Avenue. the the property is listed by Gustave White and Sotheby’s.

High Victorian Gothic, a sub-style of Gothic Revival, evolved from the writings and drawings of John Ruskin, the author of “The Seven Lamps of Architecture” (1849). Ruskin was professor of fine arts at the University of Oxford, where he established the Ruskin School of Drawing. Due to Ruskin’s influence, High Victorian Gothic is sometimes referred to as Ruskinian Gothic. Ruskin approved of color variation through material as opposed to surface coloring.

“In the 1870s, the style became popular for civic, commercial and religious architecture in the United States, but was rare for residential structures.

The high Victorian Gothic is characterized by the use of polychrome decorations, varied textures, and Gothic details, such as pointed arches, steep dormers, gables, turrets and bell towers. Rosevale is built with red bricks separated by layers of olive granite. It features pointed arches, steep dormers, a slate roof, an octagonal turret next to the main entrance, as well as a bell tower on the north side.

One of the most prominent examples of Victorian Gothic architecture is St Pancras Station in North London, which currently serves as a terminal for the Eurostar and is home to the St. Pancras Renaissance Hotel. In the United States, the Memorial Hall at Harvard University is a Victorian-era Gothic building honoring the sacrifices of Harvard men during the Civil War.

Other notable homes built by Peabody & Stearns in Newport include:

Rosevale was enlarged in 1881 by architect George Champlin Mason Sr. Mason designed several mansions in Newport, including Cheptsow and the Eisenhower House.

Excerpts from Grace W. Rives Rosevale can be found in Newport through its architecture: a history of styles from post-medieval to postmodern, by James Yarnall and Peabody & Stearns: Country Homes and Cottages by the Sea, by Annie Robinson.

The property Rosevale sits on was part of the original farmland of Nicholas Easton, one of the Seven Founders of Newport, RI. Nicholas Easton was also a colonial president and governor of Rhode Island. In 1844, Julia M. Easton sold 22 acres of family farmland on top of the hill overlooking Easton Beach, to David Sears, a philanthropist and Boston landowner.. He was the son of Ann Winthrop, a direct descendant of the first governor of Massachusetts, John Winthrop. Famous Rhode Island artist Gilbert Stuart has twice painted the portrait of David Sears, one of which is in the collection of the Metropolitan Museum of Art.

In 1845, David Sears built a marine villa on the property, to which he gave the name “Red Cross Cottage”, due to the red cross brick decoration on the house’s fireplace..

In 1876, William Cabell Rives Jr. and Grace Winthrop (Sears) Rives enlisted Peabody & Stearns to build Rosevale on the 6 acres atop the hill above Easton’s Beach. William died in 1889, while his wife Grace continued to spend the summer at the estate. The Rives Estate is visible on this 1893 Newport map.

In 1912 Frederick Law Olmstead and John T. Spencer formed the Newport Improvement Association to redesign parts of Newport. One of the main projects was to convert the existing narrow Bath Road into a large boulevard connecting Bellevue Avenue to Easton’s Beach. Grace Rives was one of the first owners to get involved and donate a property to the project. Donate 70 feet of frontage along the southern boundary of his property, totaling 0.66 acres, to create what is now known as Memorial Boulevard. In 1914, the New York Herald wrote that his act of philanthropy may have contained a hint of self-interest.

“It would be surprising if Bath Road homeowners would feel distressed to find their homes on what would be a very beautiful avenue instead of the narrow and almost impassable street, even though their land size was reduced by twenty- three percent. “

Bath Road was widened between 1916 and 1921, the new roads included streetcar tracks. In 1946, Bath Road was renamed Memorial Boulevard, and in the late 1960s, the streetcar tracks were removed and the route was extended to America’s Cup Boulevard. Since then, the southern end of the Rosevale The estate has been subdivided several times into 7 smaller lots, each with an individual residence.

Do you like Newport Buzz? We depend on the generosity of readers like you who support us, to help us in our mission of keeping you informed and entertaining you with local and independent news and content. We really appreciate your trust and support!