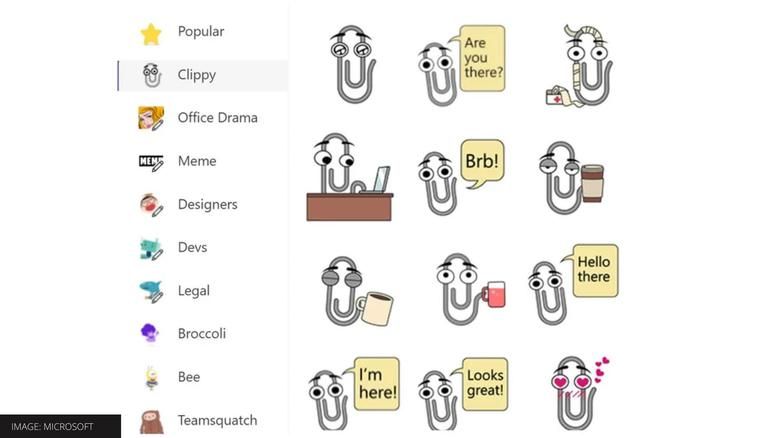 Microsoft is bringing back Clippy as a sticker pack for teams, read details here

In July 2021, Microsoft announced plans to update more than 1,800 emojis found in its services. Additionally, the company also announced that it will be bringing back the popular animated emoji Clippit or Clippy. Apparently, Clippy is returning as a retro sticker pack in Microsoft Teams and users will be able to send each other the animated version of Clippit on the video collaboration platform.

Microsoft has confirmed the return of the Clippy via an official thread posted on the Feedback Portal. Alex O’s thread says “Yes, that’s right – Clippy has agreed to come out of retirement! Whether you love him or hate him, Clippy is back with a retro sticker pack in Teams.” It’s important to note that Microsoft brought emoji back for a while in 2019 only to abruptly shut it down within days.

Microsoft Clippy is back as a sticker pack in Teams

Originally, Clippy began his journey in Microsoft Office 97. He previously offered advice and instruction to the user in Microsoft Office. While users greeted the Microsoft Office Assistant with mixed reactions, Clippy was removed from Office in 2001. He’s now back as an emoji pack in Microsoft Teams in his retro look. When attending a conference or collaborating in teams for a project, users can send emoji to each other.

The sticker pack contains several Clippy emojis along with a single line message like “are you there, Brb, hello, that looks great“and more. There are other emojis where Clippy is shown working on a laptop, wrapping herself in bandages and holding a coffee in her hands. Those who liked the ex Microsoft Office Assistant will also be happy with her back in sticker form In addition, Microsoft also replaced the paperclip emoji in Windows 11 with Clippy.

Microsoft is committed to providing users with a seamless experience with its services and applications. Emojis are a popular way to communicate in the digital age because they can convey multiple emotions. Emojis are used around the world and are based on Unicode technology, which allows them to be accessed and viewed on multiple platforms. According to the World Emoji Day website, over 900 million emojis are sent every day and the most commonly used emoji is the one with laughing tears.