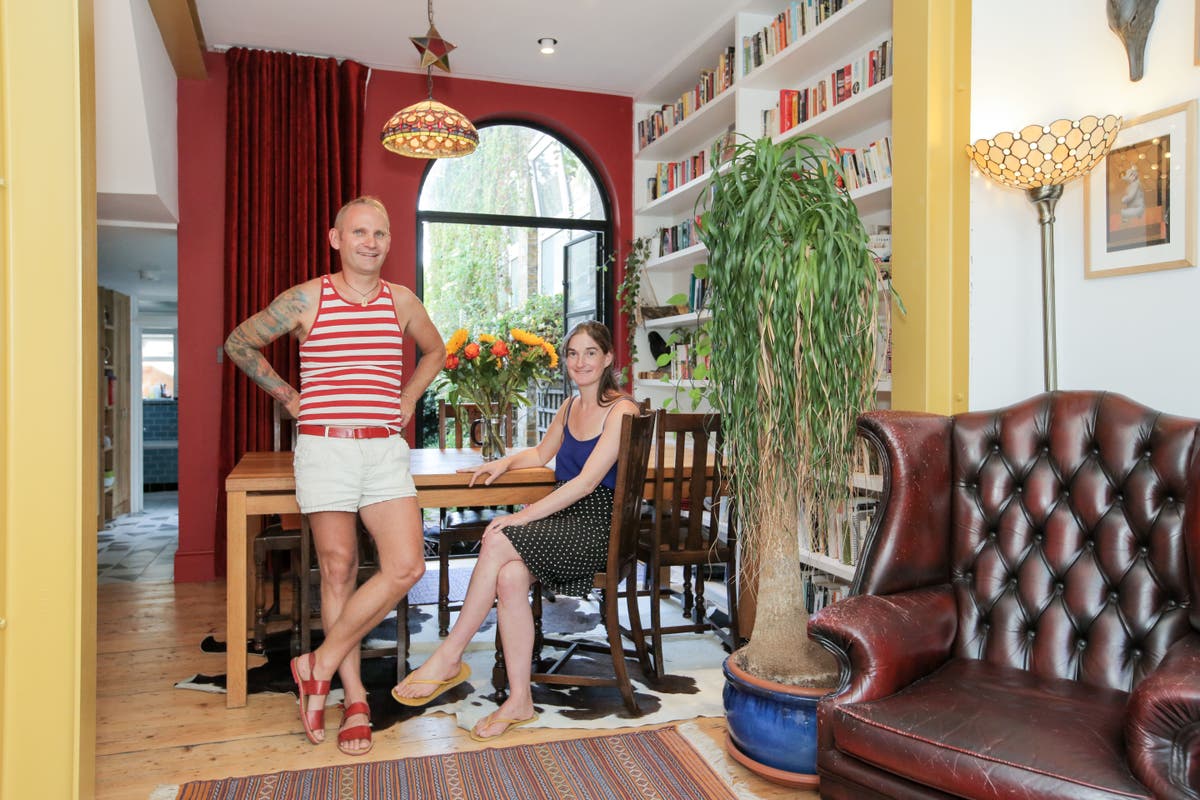 Color blends and design maximalism are all the rage, but Emily and Francis Hamilton were ahead of the curve. Ten years later, to be precise. The couple bought their home, a Georgian terraced house on East Arbor Street in Stepney, in 2011.

They hadn’t planned on doing much work there, until a minor incident in the kitchen sparked the ball.

“Our oven broke,” explains Emily, an accountant. “We thought, let’s just replace that. But then we also wanted to modernize the kitchen. Before we knew it, we were renovating the entire property.

The terraced house was a traditional two-story, two-story house with a garden but no space to spread out – so they had to get creative.

The Hamiltons found architecture studio Bradley Van Der Straeten on Google. “They had a number of projects similar to what we wanted to do, but the main attraction was their use of light,” says Emily. “A lot of traditional townhouses can be dark, so we knew that being able to use the light well would make a real difference. ”

Emily and Francis, who works as a software engineer, decided to capitalize on their existing art, book, and plant collections to create a maximalist dream home that is bursting with light and contains a riot of color.

Their briefing to Bradley Van Der Straeten was “more is more”. The couple lived in Zambia and have a lot of contemporary African art, so felt their home should contain a complementary warm color palette.

“We wanted a space as bright and eclectic as possible to match all the books and artwork we had,” says Emily.

“In a more minimalist home, things might seem a bit busy, but among all the bright colors, everything worked harmoniously. Having a lot of tidy mess can produce the same effect as a plain white wall.

Bradley Van Der Straeten rose to the challenge by opening the rooms by knocking down the walls and inserting structural steel beams. Rather than covering them up, they painted them a bright acid yellow. “They are a feature rather than something to hide,” explains Emily.

The carpets were torn and the Hamiltons were delighted to find that the original floorboards were in fairly good condition. They sanded off most of the old paint, but didn’t remove everything, to create a rustic effect. “There are still a few blue and white spots left but we love them because they remind us of their history,” says Emily.

The recovered planks were transformed into cupboards for the kitchen. “I think the manufacturers thought we were a little crazy.”

Their worktops are made of concrete dyed green and pink.

The couple and the architects went out of their way to create as little waste as possible during the renovation, using materials salvaged where they could, like London bricks from the garden. “Their color is lovely and warm and purposefully used in a herringbone pattern, which adds some visual complexity and gives the patio a soft edge to suit the planting.”

The renovation of East Arbor Street was completed for £ 200,000 in just four months. It generally went off without a hitch, with the exception of a feline-shaped hiccup. “One of the biggest problems we had, weirdly, was getting the cat flap in place,” says Emily. “For some reason, Crittal chose to put two cat flaps in a door, one at head height!”

For a decade, the Hamiltonians lived happily in their colored house. In 2019, they opened the doors of the London Open Doors, giving everyone on the streets a prime chance to be curious.

“Lots of our neighbors came by to see him,” says Emily. “I think they wanted to know what we’ve been doing there for all these months. A passing person even offered to buy it on the spot!

They didn’t take them on the offer back then, but now it’s time to move on. The renovation was completed just before the birth of the Hamilton’s first child. Now they’ve had a second, and the colorful house is just a little too cramped for their growing family. They put the house on the market for £ 850,000 with Dexters.

“It’s such a shame because we love the area as well as the house,” she says. “I will miss the kitchen the most. I would try to recreate the countertops wherever we go, but the company that makes the dye stopped producing the green, so we’ll never be able to get that particular shade again.

The kitchen is also a repository of happy memories. “Our daughter, who is now two years old, learned all of her shapes from our kitchen tiles because they have a lot of circles, triangles and squares.” The Hamiltons will wrap their artwork, books, and plants, but they’ll leave the color to the future owners, along with some of the upholstery.

“I made all the curtains, and my favorite is a big red velvet curtain, which matches the wall behind,” says Emily. “I think we’ll have to leave that because it fits so perfectly into the space, but I’ll feel like I’m leaving a part of myself behind.”

Why the internet hates the “sad girl turned happy” // The Observer

Imu alarm goes off at home