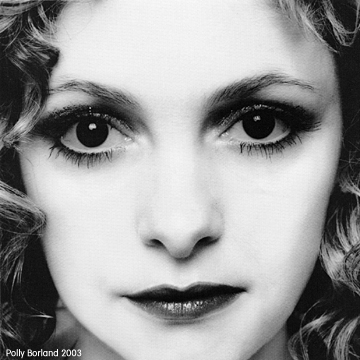 Alison Goldfrapp is an arctic fox shy of an interview subject. For example, take a look at his nonchalant words about the “Train” video. Not having seen the video before the interview, I didn’t know what to expect. After seeing it, I’d like to go back and discuss the complete image reversal that would have placed the video on the sexiest VH1 list ever. Weird. Truth be told, I wouldn’t have expected anything else from the lead singer of Goldfrapp, whose new album Black Cherry vibrates with a brighter color and a life not found in her previous material.

Nick Hyman (N): Are you having a crazy day?

Alison Goldfrapp (A): I always feel like I’m having a crazy day

N: Do a lot of press for the new album?

A: Yeah, we just started doing a few shows too.

A: We just did a few warm-up dates so it’s kind of the first few days

N: Describe the different roles you and Will will play in Goldfrapp?

A: Well, we write it all together; the only thing we don’t do together is the lyrics, i do them myself. It’s all a collaborative effort. We only write when we are truly together. I like to keep a notebook of ideas and words and stuff like that. The process really starts when we’re in the studio together and a lot of times things start with us just jamming and it really progresses from there. It’s a kind of thing that evolves and takes shape from there really.

NOT : Are you and Will open to the ideas of others?

A: We are, but when we’re in the studio, it’s just us. It doesn’t really work like that. We could ask someone to do it, we’ve written a bass part and we’re asking someone to come and play and that sound or that process will make us go deeper into the song. Something like that really.

NOT : Is there another voice on “Tiptoe”?

A: No it’s me. I just have a low voice and a high voice. When you do it live, it’s quite interesting because I can’t do that kind of singing live. It is really, really difficult. The lower it is, the less force there is. The guys in the band do the low part but I’m in the recording. A number of people have asked if he’s being processed by some sort of machine, but it’s actually me. As I get older, my voice drops and goes up too. I don’t know what will happen in a few years.

NOT : Many were surprised that you could reproduce the high notes of Felt Mountain on tour. Black Cherry seems to merge song and music where one does not dominate the other. Was it a conscious decision on your part?

A: It’s funny, because I don’t understand, but others have told me. Maybe it’s because I’m so involved in it, but I can’t see it. I can’t answer that. But you’re not the first person to mention it, so there must be something in there.

NOT : Black Cherry sounds a little different from Felt Mountain. What to leave to the change of direction?

A: It’s funny, because when we made this first album, people would tell me “what are your influences” and I always say Ennio Morricone and the disco and they would look at me and say “what”. This album is not a disco album but these records are my influences. What I liked about all those old disco albums was that they were big, fantastic, opulent, fantastic string arrangements and you could dance to them too. When you’re a musician, you take small things from a lot of different things. What I find frustrating is that people are always trying to rank what Goldfrapp is. But for me, that’s just the start of a whole lot of stuff. We both have eclectic tastes, but also for me touring on this album (Felt Mountain) and singing these songs over and over again as much as I love them, I have found the immaculate, the perfection and the tempo of this one in particular i found really claustrophobic after awhile. I wanted to express something else. I wanted to give it an energy that was not on the last album.

NOT : To open up the sound a little

A: Yeah, that was also really awesome when we got back into the studio after Felt Mountain and toured a lot to start jamming and playing more stuff ourselves; have fun with it, change things up and get a little more physical with it.

NOT : The recording of Felt Mountain and Black Cherry were very different

A: Yeah, but it was more of an accident than a conscious decision really. We just needed a place to put our gear and we had this little studio. We continued to have these fantasies that we would go somewhere much more elaborate or somewhere with a great view. But once we started the album we were afraid to take root because it might stop so we ended up just staying there. It wasn’t really a conscious decision.

NOT : Do you think the sound of Black Cherry is influenced by where you recorded it?

A: Not really. At the end of the day, we’re the same two people and wherever we go, it’s us. You can’t run away. Obviously your environment is important but I don’t think it’s that relevant although it can be inspirational.

NOT : Your sound is very cinematic. How important is the image in the overall Goldfrapp scheme?

A: When I make music, the image, where and where it is and what happens in a song is parallel for me; everything is part of the same thing. But then the image that you present to the public, your personality, is completely different, which I find quite difficult. It’s not the same creative process as when you write; do videos and photo shoots. I never look at what I really want to look like. I always think, “My God, I look like shit in there” or “Shit, I wish I hadn’t done my hair like that”. You know it’s real while in your mind the fantasy world in your head looks like the penultimate epic video movie. Then the image is your perception of a personal situation, so it’s really important to me, but at the same time when you’re making videos and taking press photos it’s a bit out of your mind. control. It’s a bit of a weird contradiction, the videos. I mean, making a video for a song is just a crazy idea because the song already has a narrative and an image and then you make a video and you do another narrative and another image and a lot of times the two don’t freeze. not . You have agendas like what the record company wants, what MTV wants and all that other bullshit that goes into it, what the director wants so it’s very difficult where in your head it can be a lot more exciting. But then accidents happen and you can never predict it when you compromise for others. Sometimes you just might not be planning something and something fantastic happens. You can never predict these things.

NOT : The Felt Mountain singles were remixed when they were released, do you plan to do the same with the Black Cherry singles?

A: We made our own little remix of “Train” and we’re going to try to do it again, it’s not always convenient in terms of timing.

NOT : What’s the biggest misconception about you?

A: Charges. I had an answer for it the other day, now I’ve forgotten about it. If I start to worry about this shit, then you’re in trouble. I hate being labeled. If someone says I’m like one thing, then I’m like the other. Music is multifaceted and I hate being categorized.

A: No, I didn’t have the time or the inclination. I am very happy and involved in what I am doing. I’m not very good at doing too many things at once. I am so involved in all aspects of Goldfrapp; writing, recording, producing, mixing, illustrating that there isn’t a lot of free space to do anything else really.

N: What reaction would you like listeners to have when listening to Black Cherry?

A: I do not know. Just to take a little trip. Have fun and enjoy it. When you listen to an album, it’s such a personal experience that you just do what you want with it and take what you want with it. It’s yours and can be very personal to you and I like that. If you think a word means something and it doesn’t, it’s good to make it your own. Once it’s there, you give it away. It’s everyone’s as much as it’s yours.

N: Do you think the Goldfrapp sound will constantly evolve?

A: I would like. I don’t know if that will be the case. When it doesn’t, I’ll be a little disappointed. For me, as a person who makes things, I want to try to challenge myself and try new things. That’s it, to be creative, to be excited about something. To grow is to be excited, to try new things and to enjoy them.

N: What can we expect from the live this time around?

A: Well we have a bass player Charlie who used to play with Robert Plant. He’s fantastic and adds a lot to it since we didn’t have a bass player last time around. The new album being much more beat oriented, it seemed obvious to have a bass player. I think the bass is such a beautiful physical instrument. We have another keyboardist and the guys in the band do the backing vocals.

N: How did you choose “Train” as the first single?

A: It was truly a universal choice. It’s funny, the first single always seems to happen and to be a gut thing. It wasn’t if it was the most commercial or something, it was fair.