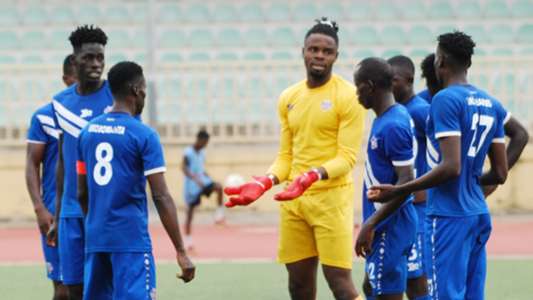 The Yenagoa-based squad will face the Tunisian giants after overtaking their Guinean opponents on Sunday night.

Nigeria’s National League team Bayelsa United will face Tunisian side CS Sfaxien in the second round of the Caf Confederation Cup.

The Yenagoa-based side outscored AS Ashanti Golden Boys 4-2 in a first-round clash at Yenagoa Township Stadium on Sunday night.

Depreye Tebowe’s men reigned supreme thanks to a brace from Okardi Inikurogha as well as strikes from Favor Martins and Emo James.

The visitors scored their goals thanks to Moussa Keita who beat goalkeeper John Shaibu twice.

The match against the 2021 Guinea National Cup finalist was settled in a single round due to a reported coup attempt in Guinea.

To reach the tournament play-off round, Bayelsa United must negotiate their way ahead of the eight-time Tunisian Professional League champions 1.

Despite the enormous task ahead, goalkeeper Shaibu is optimistic about his side’s chances of overtaking the North Africans.

“We thank God for today’s victory. It was not easy, but we are proud to have done the job, ”said the youngster. Goal.

“Knowing that the first round would be played in one game, we knew Ashanti Gold would come out strong and luckily we were very prepared for them.

“Let’s leave the score aside, it’s a very good team and I must congratulate them for their fighting spirit. I will also say a big thank you to my teammates for not giving up when it mattered the most.

“After qualifying for the next round, we will start preparations immediately as our goal is to reach at least the semi-final of the Caf Confederation Cup. “

“We don’t know much about this CF Sfaxien team but according to its past exploits in Africa, it is certainly a solid team,” he continued.

“However, football is not played in the pages of the newspaper, so we are not afraid to face them or to face other teams in Africa.

“All we owe each other is to prepare very well, hoping that luck smiles on us at home and away.

“We will be reviewing our game against Ashanti Gold and making sure we spot our mistakes and correct them before our next outing.”