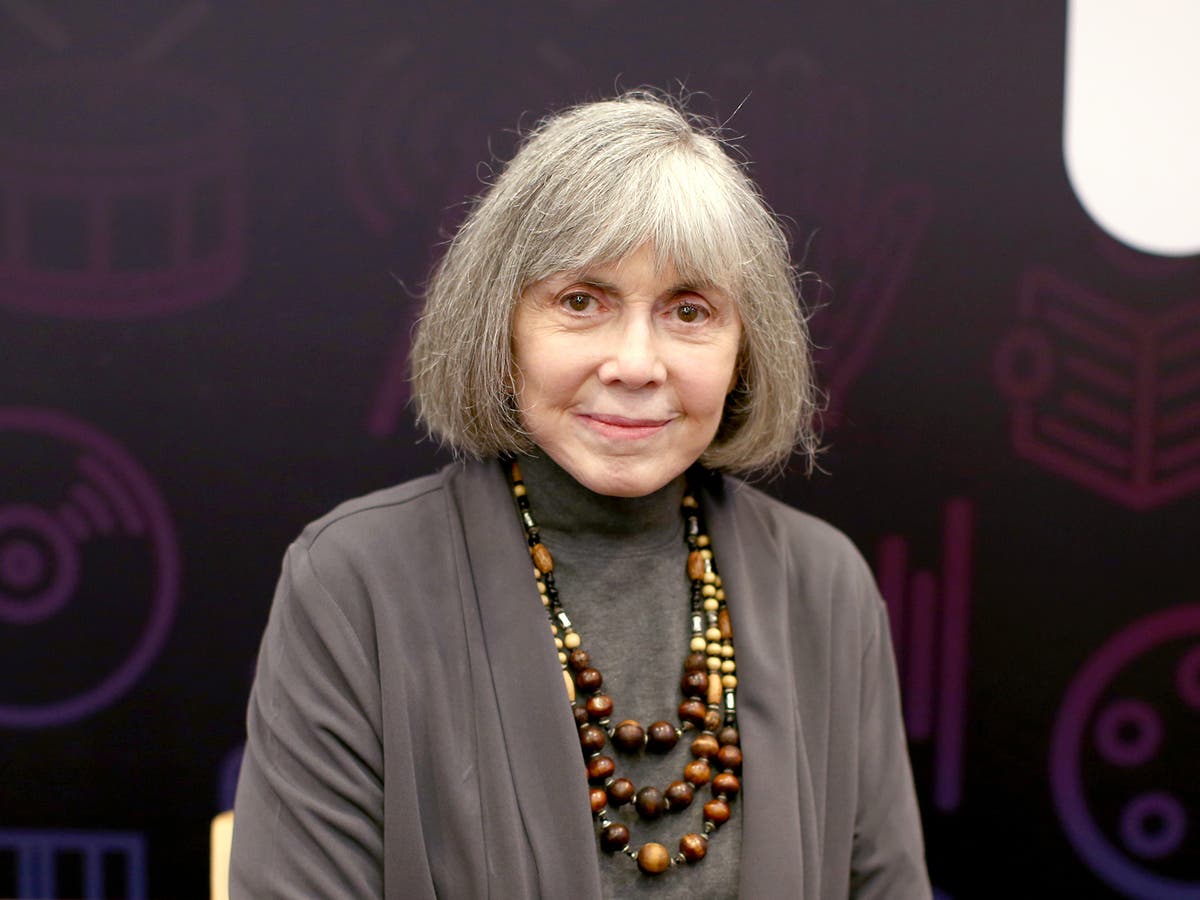 Anne Rice, a gothic novelist who helped resurrect the vampire story with dark and alluring bestsellers such as Interview with the vampire, who was adapted into a blockbuster film and used the popular blood-sucking creature as a means to examine mortality, sexuality and life on the fringes, has died aged 80.

A native of New Orleans who has placed many of his books in riverside bars, noisy gambling dens and dark oak-lined streets, Rice has written more than 30 novels that have sold over 150 million dollars. ‘copies. Although she went far beyond Gothic horror, the spinning tales of 18th-century Italy, and whipping erotica, she has remained best known for her vampire novels, which have acquired a devoted audience among readers who saw themselves a part of themselves in its lonely protagonists, who seek companionship and redemption even as they read minds, cry tears of blood, and try to stay away from the fire and the sun.

“His refugees from the sun are symbols of the insane walk, those of us who, by choice or not, live on the fringes,” wrote Matthew Gilbert, reviewing his novel. Queen of the damned (1988) for The Boston Globe. Profiling rice for The New York Times, Susan Ferraro noted that her vampires “are loners, prisoners of circumstance, compulsive sinners, full of self-loathing and doubt. They are, in short, Everyman Eternal.

Rice had mixed opinions on the supernatural. She didn’t believe in vampires but admitted that ghosts could exist. But she was sure that something unusual had happened to her around 1970, shortly before launching her literary career, when she was raising her young daughter in the Bay Area and working on a master’s degree in creative writing. She had what she later described as “a horrible, horrible dream” – “a prophetic dream of my daughter dying from a problem with her blood”.

His daughter, Michele, was soon after diagnosed with leukemia. She died in 1972, a month before her sixth birthday. Overwhelmed by grief, Rice immersed herself in a lyrical short story she had started a few years earlier, about a reporter interviewing a vampire named Louis. She added a new character, Claudia, a child vampire with blond hair like Michele’s; an anti-hero character, the vampire Lestat, is inspired by her husband, poet and painter Stan Rice.

While writing about Louis, who became a vampire in 1791, she found herself writing about her own life. “I really got into the character,” she told the Time. “For the first time, I was able to describe my reality, the dark and Gothic influence of my childhood. It’s not a fantasy for me.

The story became his first novel, Interview with the vampire (1976), who launched The Vampire Chronicles, a 13-volume series populated by androgynous-looking vampires, ancient Egyptian rulers and undead rock stars, as well as a few mere mortals. The book was adapted into a 1994 film directed by Neil Jordan, starring Brad Pitt and Tom Cruise, and made Rice a literary phenomenon.

Some critics have scoffed at his work, calling its characters underdeveloped and its prose overworked. “To claim that he has any purpose other than breastfeeding eroticism is absolute hypocrisy,” Edith Milton wrote in The New Republic, reviewing Rice’s debut novel. The second installment of The Vampire Chronicles, The Vampire Lestat (1985), had “dismal, cliché phrases that repeat every idea and every feeling many times over,” said Time literary critic Michiko Kakutani.

Yet Rice’s books continued to sell and helped bring vampires back into popular culture, years before the release of Stephenie Meyer’s Twilight series or TV shows such as Buffy the vampire slayer, Real blood and The vampire diary. The third installment of The Vampire Chronicles, Queen of the damned, was adapted into a 2002 film, and the series inspired a 2006 Broadway musical, Lestat, with a score by Elton John and Bernie Taupin.

“Anne was a fierce storyteller who wrote big, lived quietly, and envisioned worlds on a grand scale,” her longtime Knopf editor Victoria Wilson said in a statement. “She invoked the feelings of an age long before we knew what they were. As a writer, she was decades ahead of her time.

After negative reviews of her first novel, Rice decided to explore new literary ground, taking a break from Gothic to write. All Saints Day (1979), a historical novel about free people of color who lived in New Orleans before the Civil War, and Cry out to the sky (1982), on castrated opera singers with a high vocal range. “In these books, she writes rich and elegant prose in a baroque style, as if every word were laid on velvet and encrusted with jewels”, Washington post journalist Sarah Booth Conroy later wrote.

“I’m a divided person with different voices, like an actor playing different roles,” she told the Time in 1988, describing his various literary personalities. She added that in regards to her books on Sleeping Beauty, “I wanted to write the kind of delicious S&M fantasies that I had been looking for but had not found anywhere. I’m really quite proud of it, shocking as that may be. I have the impression that if I am read in 200 years, it will be as much for that as for anything else.

Howard Allen O’Brien was born in New Orleans on October 4, 1941. It was named after his father, a postal worker and World War II veteran. woman an unusual advantage in the world ”- and started using Anne’s name on her first day of school.

When she was 15, her mother passed away. Rice said the cause was alcoholism and immortalized her in fiction, turning her into the mother of the main character, Gabrielle, in The Vampire Lestat. “When I lost my mother, I lost the one person in the world who really cared about me, cared for me in a selfless way,” she said.

Her father moved the family to North Texas, where Rice graduated from high school in Richardson, attended Texas Woman’s University and North Texas State College in Denton, and met Stan Rice. They married in 1961 and moved west, enrolling at San Francisco State College (now a university), where her husband became an English teacher and headed the creative writing department. She obtained a bachelor’s degree in political science in 1964 and a master’s degree in creative writing in 1972.

By this time she had started writing gothic short stories, her imagination fueled by 1930s horror films such as Dracula’s daughter more than classic works of vampire literature. But after her daughter’s death, alcohol increasingly took over her life – “All I wanted to do was read and drink,” Rice said – until 1979, when which she and her husband stopped drinking when their son was born. The family moved to New Orleans in the late 1980s, settling a few blocks from where Rice grew up, in a 19th-century house that served as the setting for The time of the crime (1990), the first volume in a Gothic trilogy known as Lives of the Mayfair Witches.

After her husband’s death in 2002, Rice announced that she would conclude The Vampire Chronicles next year with Song of the Blood. She resumed the saga in 2014 and also collaborated with her son Christopher on novels including Ramses the Damned: The Reign of Osiris, which is scheduled for publication in February 2022.

In addition to her son, the survivors include three sisters.

Rice has written on religion frequently, recounting his Roman Catholic childhood, his turn to atheism at the age of 18, and his subsequent return to the Catholic Church in a memoir, Called out of darkness (2008). She has also written two well-reviewed novels on the life of Jesus, starting with Christ the Lord: out of Egypt (2005), before announcing in 2010 that if she remained “committed to Christ”, she had “ceased to be a Christian”, irritated by the opposition of the Catholic Church to same-sex marriage. (Many readers viewed her vampire novels as a gay allegory, a read she praised but said was unintentional.)

“I found what the characters in vampire novels were looking for,” she told NPR, thinking about the religious revival that brought her back to Catholicism in 1998. “They were groping in the dark. They lived in a world without God. I have found God, but that doesn’t mean I have to be a supporting member of an organized religion.

Even as she jumped between genres, she once told her alma mater in an interview, her central theme remained the same: “How we save ourselves, or how we are saved.